The Hidden Method of Paganini Part 2/2

In order for us to understand (from a contemporary point of view) the true essence of the revolutionary method of Paganini’s way of performing we should take a more detailed look… so here we go!

In the first part of the  "THE HIDDEN METHOD OF NICOLO PAGANINI", we spoke about the Barucaba variations, a "study for the Violin”(Paganini) with "a small number of pages”(Paganini). This work was one of Paganini's last compositions and an important part of his anxiously guarded "secret" of violin playing. Based on short exercises in variation form in almost all major scales of the Ring of Fifths, this composition is very useful as a preparation of the highly demanding 24 Capricci and other virtuoso compositions and concertos by Paganini.

Paganini created a new world, neglected for a long time by the academic violin circles who tried to maintain the status quo of the tradition. "Paganini destroyed all habit barriers and all rules of the tradition". (Carl Guhr)

Paganini asked his students (six-year old student Camilo Sivori) from the first lessons “…to place his left hand against the ribs of the violin" in the third position.

So using the thumb as a fixed support and balance, the fingers have the complete flexibility over the fingerboard, covering much more space, using extensions, glissando scales with the same finger and ....without thinking of fix tetrachord positions..... Paganini is the founder of the fingered octave playing on the violin. In his third Caprice, he wrote even octave and Double Stop unison trills. Placing initially the first finger on the fingerboard and then stretching the fourth was the traditional way (before Paganini) to reach a larger extension. Paganini on the opposite placed initially the fourth finger on the fingerboard and then stretching the first finger he played fingered octaves and tenths.

PAGANINI CHROMATIC SCALE
Paganini noted in Breslau the "Scala di Paganini". According Philippe Borer ``This scale clearly held a particular significance for the illustrious violinist to want to associate his name with it".

According to the proper nature of Paganini's musical expression and chromaticism, aligned with the ancient tradition we should never forget the Paganini statement: "He that would reap benefit from my secret must be possessed of Intellect".

In all ancient Mysteries, the string instruments were regarded as secret symbols for the human constitution, the Body of the instrument represented the physical physical form, the Strings - the Nerves, and the Musician - the Spirit”. By playing upon the nerves (strings) the spirit (musician ) created the created the harmonies of the functioning balance (sound of creation). This corresponds to the Pythagorean harmony of the spheres. The Musica instrumentalis (real sounding vocal and instrumental music), the Musica humana (harmony of the human microcosm, between body and soul) and the Musica mundana (harmony of the whole Universe macrocosm, world / spherical harmony) have the musical-harmonic basis as a common Number proportions 2: 1 (octave), 3: 2 (fifth), 4: 3 (fourth) etc.

Paganini developed his own scale, known as the "Chromatic scale".
This scale played an important role in the Paganini Method. The chromatic scale is formed by 12 pitches, creating an extraordinary expressive tension. The interval between any note and the previous or next is a semitone. In twelve-equal temperament, the "Tritone" (diabolus in musica, augmented fourth, diminished fifth) divides the octave exactly in half as 6 of 12 semitones. Traditionally the use of full chromatic scale and the use of the tritone was absolutely restricted. Paganini was the first significant romantic composer who used the chromatic density as an important means of expression (especially the „Tritone“).  The specific expressive colourful tone relations, based on both, the Italian tradition(Tartini, Locatelli, Corelli) and the ancient pythagorean greek origin. This Chromatic „atmosphere“ set the milestones in his musical expression and intonation method.

The music language is based on two pillars: Niccolo Paganini said “Suonare parlante” - “Speaking with notes” (articulation, “speaking” with the bow) and Giuseppe Tartini added “To play well, you have to sing well”.

The term “virtuoso” was used in the early 19th century to identify a “technically consummate, brilliant master in the Arts, mainly in music.” Today, the term is mainly understood in the sense of an exceptional playing technique, whereas with Paganini the term has a wider meaning. Apart from his exceptional playing technique he made the violin a meaning of expressing his innermost sentiments and his Characteristic musical message. Paganini based his style performing using the italian bel canto singing principles:

Paganini was able to express music on his instrument with extraordinary truth, the tempestuous passions just as well as the deepest, most tender feelings, both suffering and joy. Without this emotional component one cannot fully understand his music. Paganini was indeed a musician in the highest sense of the word and in his own, incomparable way. The audience admired the way of his expression, the power of the articulation to move emotional and the special esoteric influence of the tone and interval characteristic, based on the same aspects as the human voice.

He cultivated a special sound technique by which the violin imitated the human voice, the so-called "suonare parlante" ("playing that speaks"). This was a typical characteristic of Paganini's performing style! 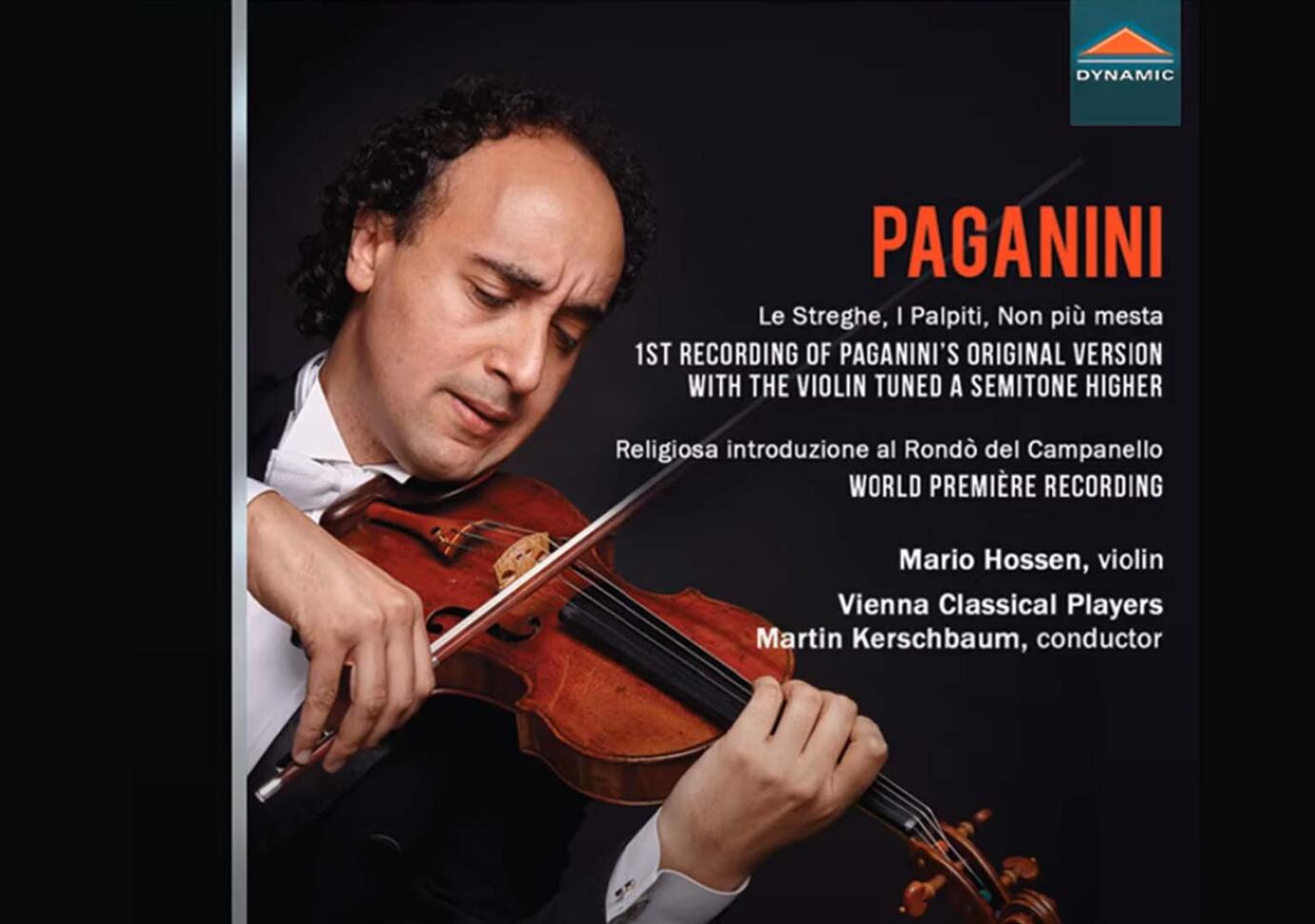 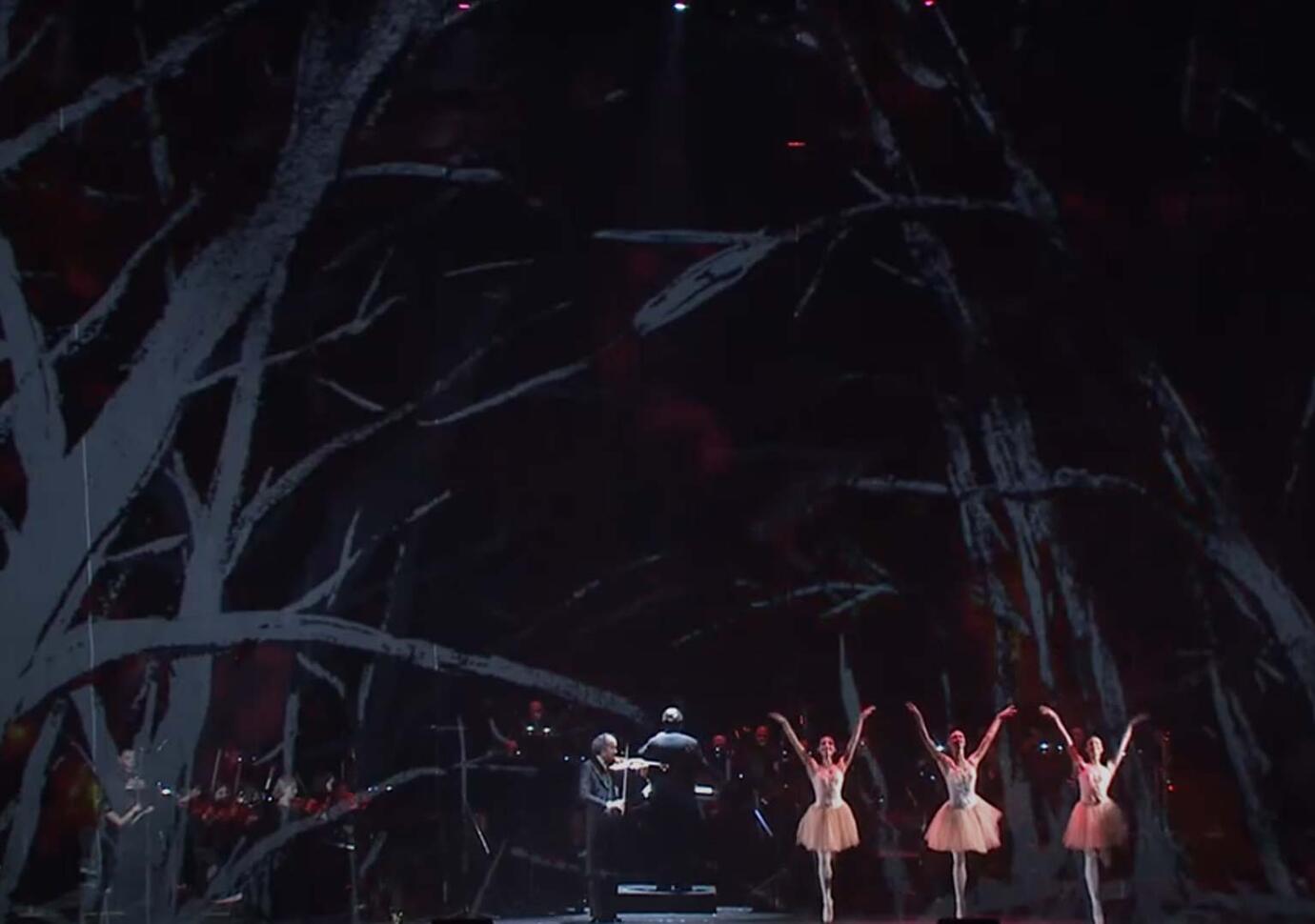 Video: Niccolo Paganini: Le Streghe - The Witches, with the Violin tuned a Semitone higher - as in the original score!

PICTURES:
1) Paganini picture/ the thumb as a fixed support and balance
2) Fingered Unisono Double Stops  Thriller/ stretching the first finger (Caprice No.3)
3) The Mundane monochord with its proportions and intervals
4) Scala di Paganini" containing all the essential tone relation
5) The thumb remains in the third position and the left hand rotates, covering as much space as possible without shifting
6) Descending chromatic scales with Tremolate(Zittern)... techniques, inspired by the italian coloratura singer (Barucaba, Book I/4) 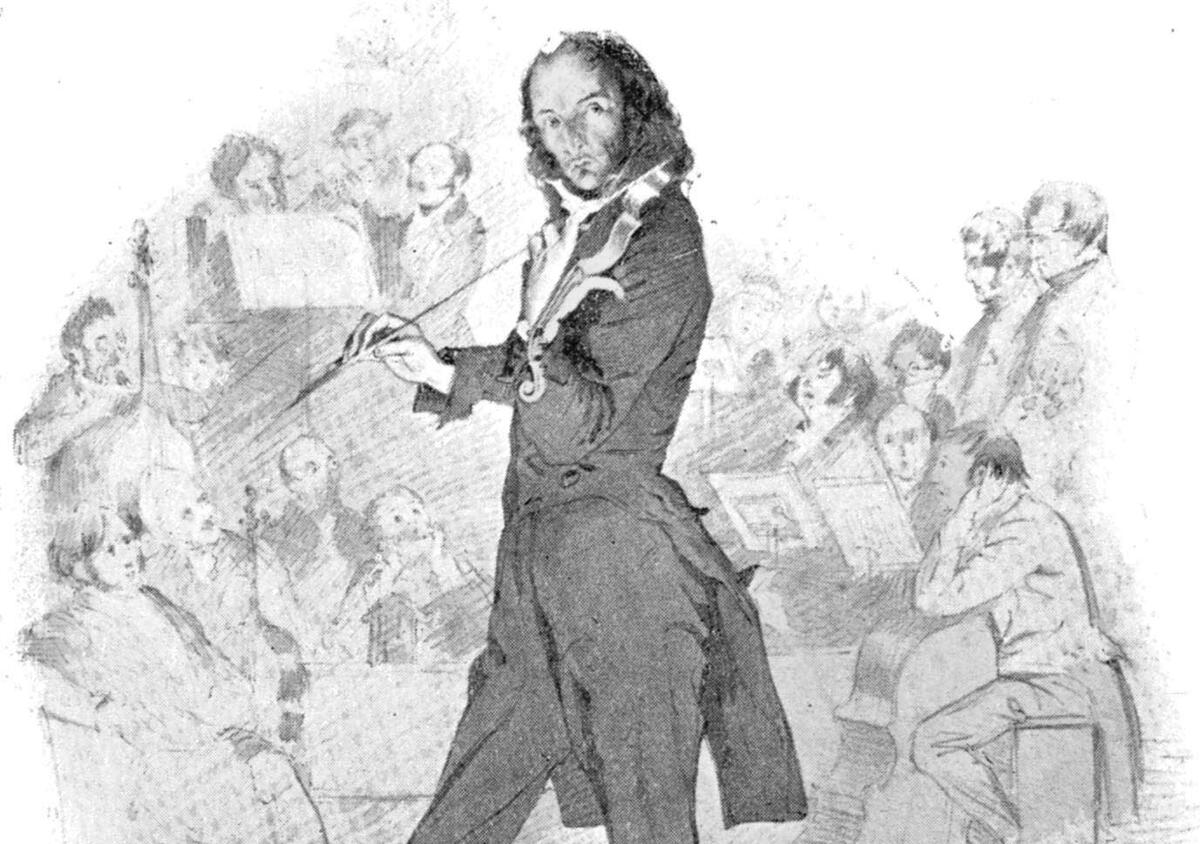 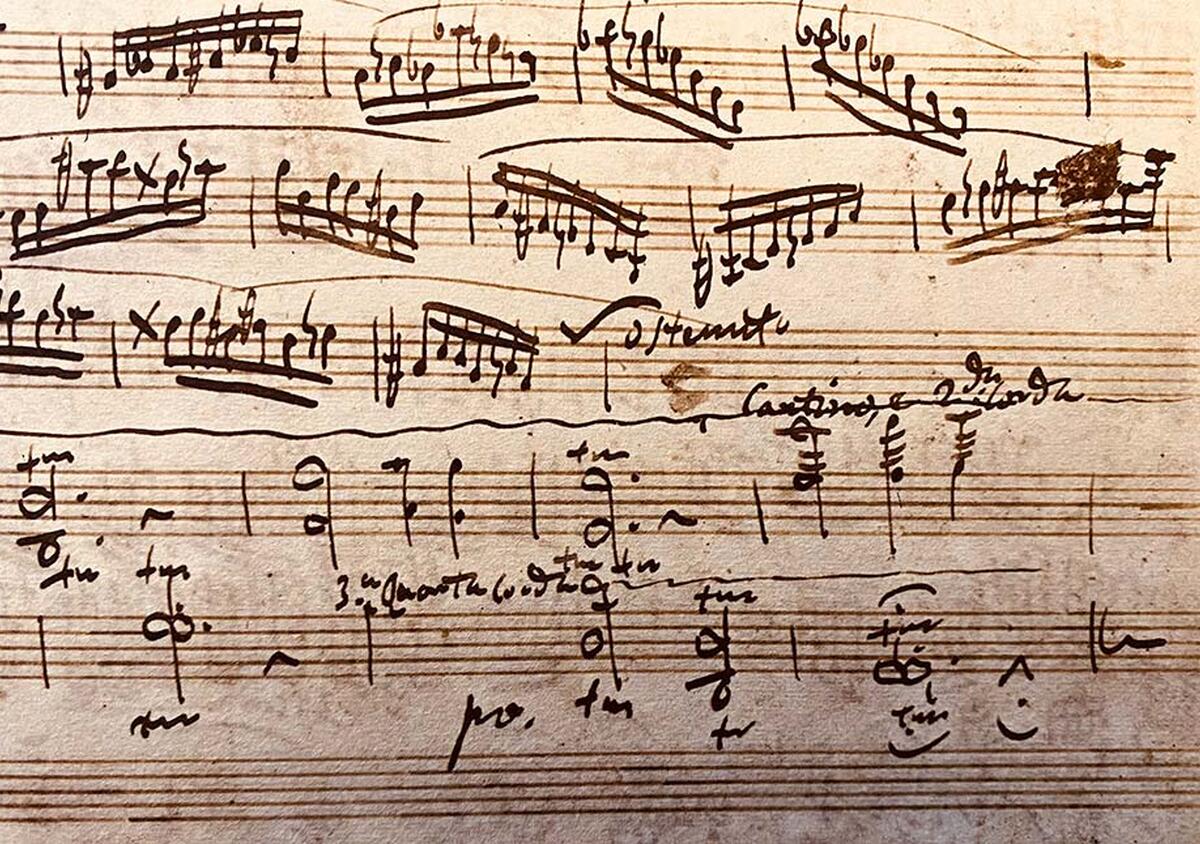 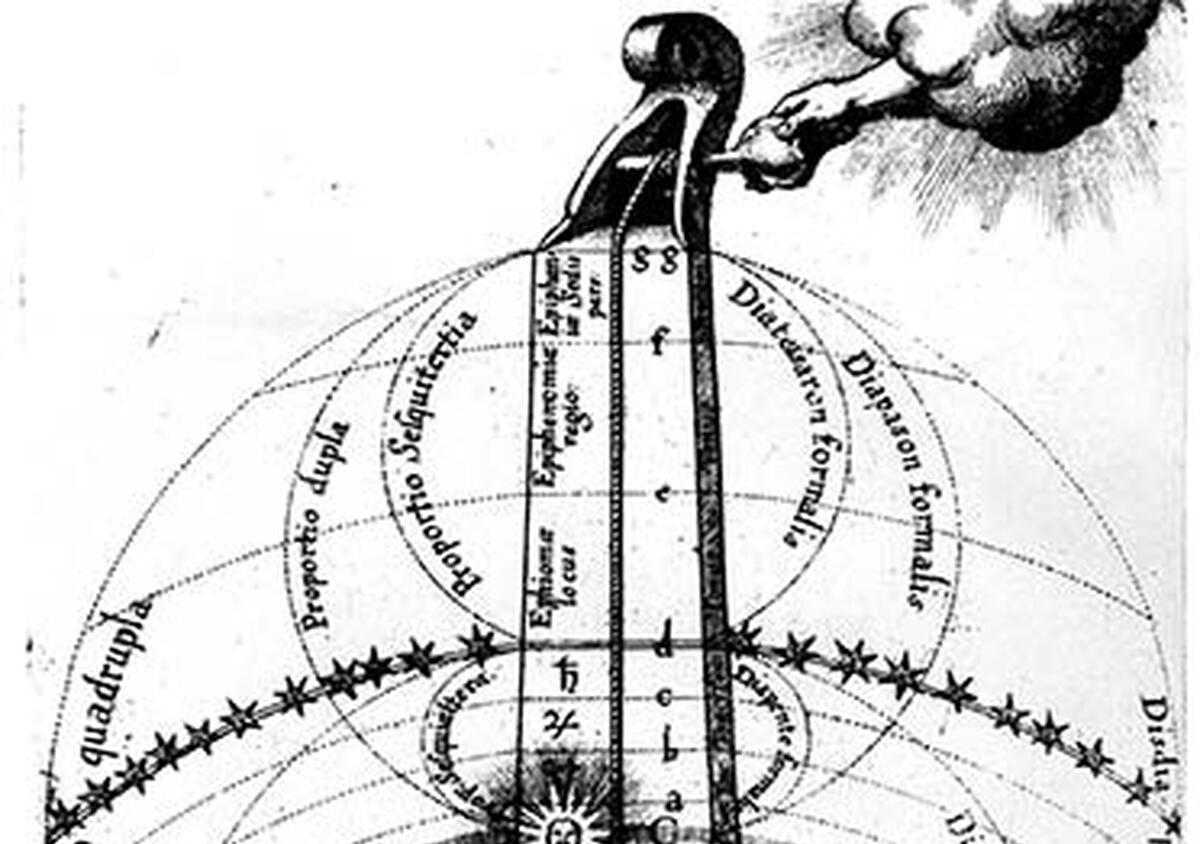 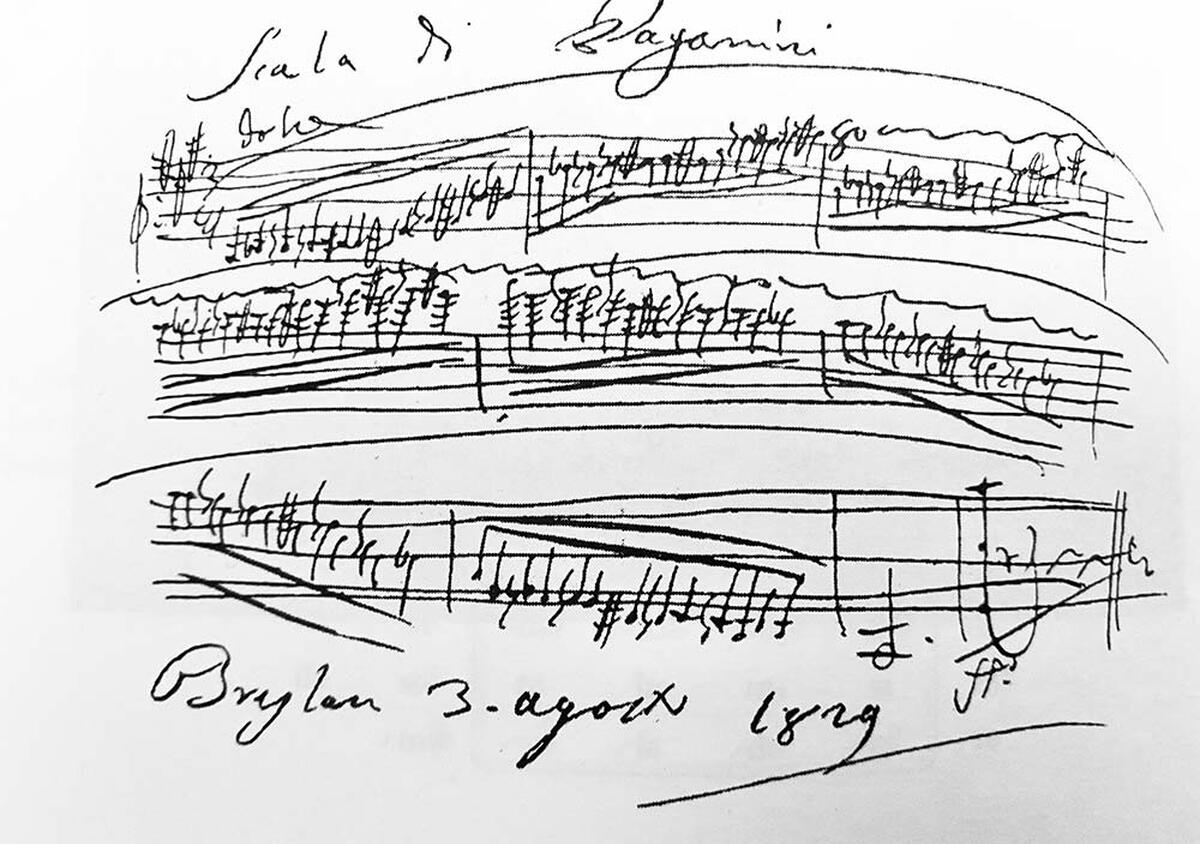 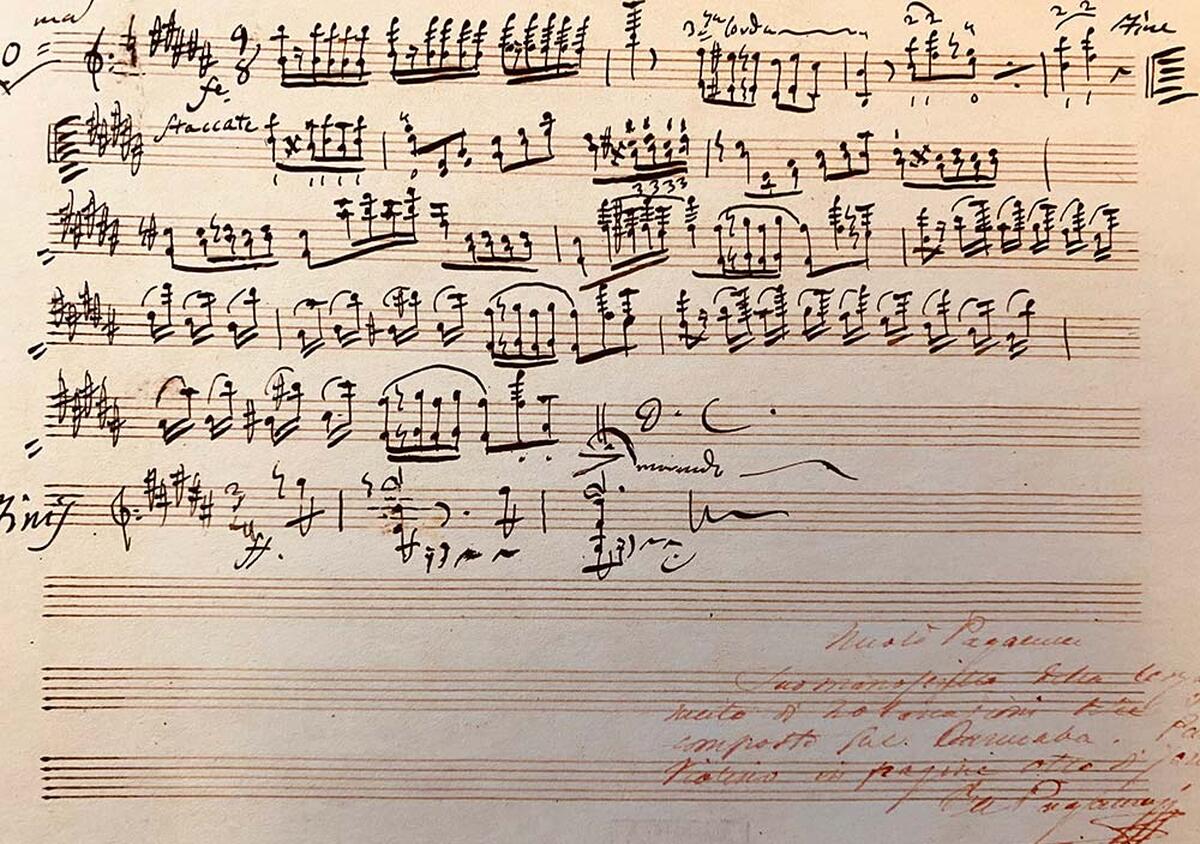 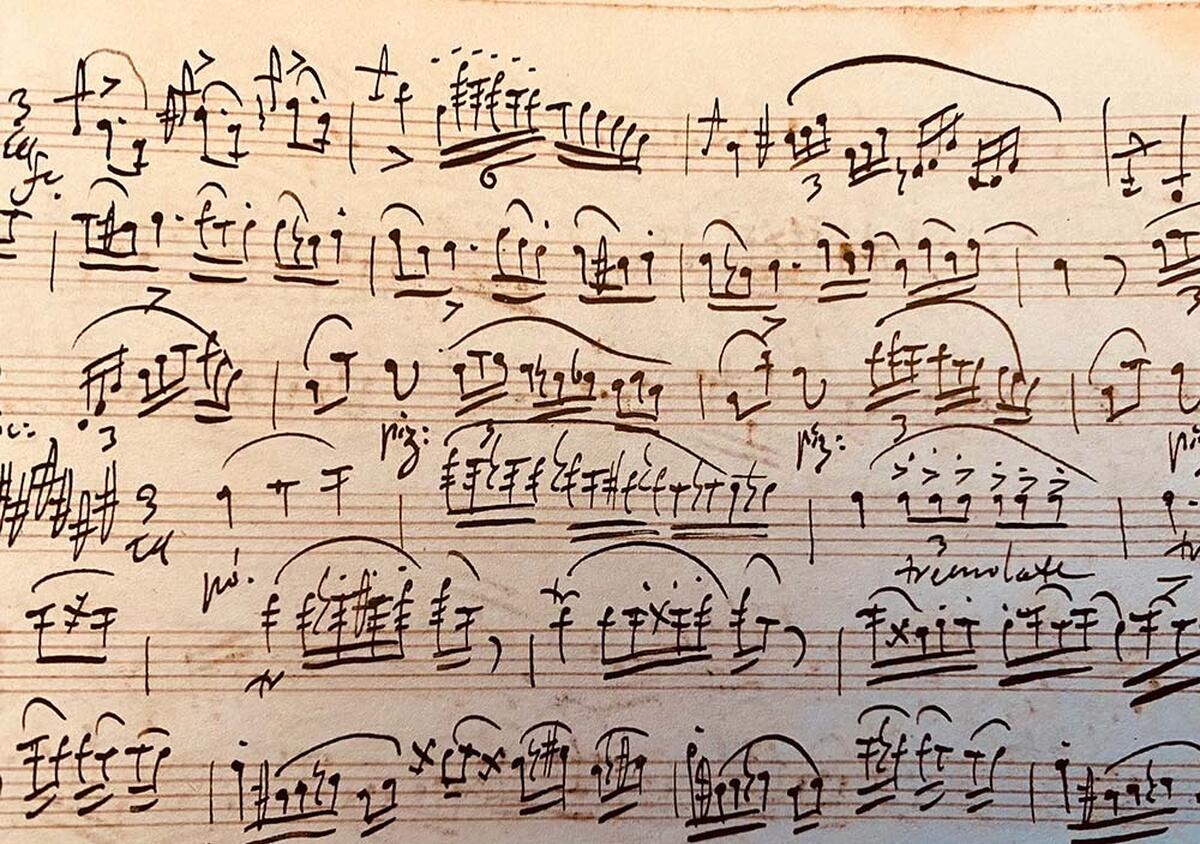